Edison: A Peek Into the Design of The Robot Anyone Can Afford

Electronics and playing LEGO have always been passions of mine. As a child I had a monster collection of LEGO and drooled over my ‘Dick Smith Electronics’ catalogue filled electronics parts and kits (Australian version of Radio Shack/Tandy). As I enter my 40th year, I am finally bringing these two passions together with Edison.

Edison is a LEGO compatible and programmable robot that anyone can afford and has just launched on Kickstarter for $39 each. That’s an amazing price, even if I say so myself! So, the question is how have I achieved this when other less functional robots with fewer sensors sell for multiples of this price?
Well, part of the answer is in electronic component recycling. Not recycling used components, but rather reusing single components for more than one task within the robot. Doing this, as you’ll learn meant that I had to come up with some fairly unique engineering solutions.

One of the most complex component recycling solutions is the infrared (IR) receiver module. I wanted this single component to:

Sounds easy enough, right! Well not quite, when Edison is driven from a TV remote control the IR signal comes from above and can come from any angle. When two Edisons communicate they rely on IR light reflecting off the ceiling, so this too requires that the signal comes from above. This dictates that the IR receiver module must face upwards to work effectively. Point 3 throws a spanner in the works, because IR light must reflect off an obstacle that is in front of Edison. Therefore, the IR receiver module needs to be forward facing. Uhh ohh!

The solution to this conundrum was to face the IR receiver module up and create a lens that both reflected and refracted IR light. Now light coming from in front of Edison gets to the IR receiver, but also allows light to enter from above. The same lens shape works for the upward facing IR LEDs that transmit IR light up with some of the light also being transmitted forward for obstacle detection. The lens also works for the two upward facing light sensing phototransistors that allow Edison to follow light.

Needless to say getting the lens to work the way I wanted was no walk in the park. Unlike other aspects of prototyping Edison, I couldn’t use my 3D printer as it can’t print a perfectly transparent lens with a polished surface. I called on close friend and Industrial Designer Andrew Rogers for assistance. Andrew calculated the angle of the refracting surface, but he also added concave and convex surfaces that give Edison his curved front. This shape helps to focus the refracted light from the IR LEDs and back into the IR receiver module. When you look into the front of the lens you can see the PCB and components are magnified.

Andrew’s next job was to build a testable prototype. He did this by creating a 12mm (0.5in) thick disk with a diameter of 410mm (16.1in) out of transparent acrylic. This was made by hand on a lath with the refracting surface all the way around. The disk was polished with diamond paste and he cut sections from it to create a working prototype.

It took a while to get the obstacle detection right, as there were three elements at play, the optics of the lens, electronics (component selection and biasing) and software (IR LED pulse frequency and digital noise filtering). After a couple of weeks of trial and error we arrived at the right combination and achieved accurate left and right side obstacle detection with two way IR comms and the ability to receive commands from a TV remote control.
This is just one area where Edison recycles components and just one of many engineering challenges that were overcome in order to keep costs down. Another challenge was the line tracking phototransistor and how it doubles as the programming port, but that story may have to wait until another time.
Learn more about Edison at www.meetedison.com 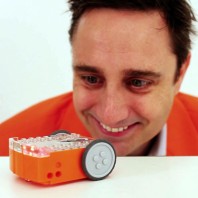 Brenton O’Brien is an electronics engineer and creator of the Microbric electronic construction system. He has brought into the world a number of robot platforms including the Viper, I-BOT and Microbot and has just launched his latest creation Edison, a low cost LEGO compatible and programmable robot. Learn more about Microbric and Edison here: www.microbric.com www.meetedison.com