Fabienne “fbz” Serriere, a Seattle-based hardware hacker and an avid hand knitter, has been artfully transforming algorithmically-generated patterns into unique scarves and wraps made from high-quality Merino wool with her knitting machine, the KnitYak.

Fabienne’s journey started in 2011 when she acquired her first knitting machine, a Brother KH930, and hacked it so that she could upload knitting patterns as bitmaps from a computer instead of doing so manually.

The hack works by simulating the presence of a floppy disk drive from which the machine loads bitmap files representing the knitting patterns. To further automate the programming process, the machine’s keypad was also hacked so that the key presses required to load a new pattern can be driven from a Python script, like the one in the video below.

It took Fabienne six months to fully grasp the capabilities of her knitting machine. Her studies culminated in the production of an experimental batch of double bed jacquard Mate Cosies, which pushed the limits of what could be achieved on a 30-year old consumer-grade machine. Indeed, unlike industrial knitting machines, hers was unable to bind off the last row of a design, making that last step a time-consuming manual process.

Being able to quickly upload knitting patterns to the machine, Fabienne started exploring the mesmerizing beauty that sometime emerges from the chaos generated by elementary cellular automata algorithms. By focusing mostly on cellular automaton rule 110 and 73, Fabienne wrote Processing scripts that allowed her to experiment with patterns and dimensions until she found the visually pleasing variations that she wanted.

Thanks to her randomly seeded algorithms, Fabienne ensured that each knitted creation would be unique, yet repeatable on demand. To this end, if KnitYak gets funded, Fabienne intends to ship the code and the seeds used to knit her patterns, offering a level of personalization to her customers that is unparalleled in the textile industry. Fabienne is now crowdfunding KnitYak, pursuing her dream of launching a local, on-demand, textile manufacturing business. 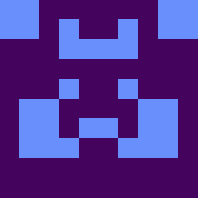 Software developer, autodidact hardware hacker. Founder of two startups and Microsoft alumni. Making and hacking things has been my passion ever since I was a kid. I love discovering the work of other Makers and writing about their achievements. You can find out more about me here.