We see stories here on Makezine quite often about the large Maker Faires – Bay Area, Rome, Detroit, Bangkok, Paris. However, we need to remember the small Maker Faires too. The ones held in public libraries instead of large venues, over one day instead of three. They are just as important as the large ones and are sometimes overlooked.

On October 19th, I had the pleasure to attend the Colorado Springs Maker Faire. It is a small faire, held in a local public library but what it lacks in size it makes up for in fun and enthusiasm.

The first maker I met was a cosplayer whose character was John Snow. He looked so much like him, I quickly made sure to ‘bend the knee’ before I approached him. :) He made the throne of swords you see him pictured with here out of wood and he told me it’s available for rental.

I then came across a DJ table where kids can learn how to DJ. He encouraged the kids to play with the knobs and buttons, spin the record and just have a good time.

There was even a maker who repurposed glass bottles and glasses to make jewelry!

I met an amazing young man named Rob Schaffner, who started his business ‘Be Cool’ in 2009. He creates and sells gift items made from repurposed stone with his father including business card and cell phone holders, cheese board sets, stone trivets, and stone coaster sets. All products are made from natural stone- some with repurposed granite countertop scraps, some from intact natural stone pieces and some items cut from stone tiles. His work was beautiful and in talking with his grandmother who was there supporting him, he is looking for people to supply him with tile he can use to make his products. I was moved to help him and will be donating to him leftover tile my husband and I have. We have so much of it and it makes me happy to think it will go to a good home and to help him out.

They had a lot of activities for children. There is a huge open area at the front of the library, two stories tall, where they were having kids make their own rockets, shoot them in the air and try to get them to stick in the ceiling.

I can’t forget to mention that the library has tons of things specifically geared towards making. Including their own green screen and music recording studio! 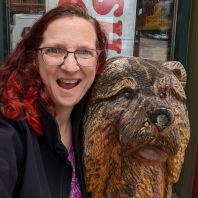 Alicia is the Software Engineering Manager at Make:. You may have seen Alicia walking around Maker Faire with her Bat Girl cape. Do not be afraid, she is devoted to saving the world, one website at a time. Her magical powers include turning coffee into code and fixing 404 not found errors.

Alicia has been coding since before coding was cool (OK, we aren’t talking way back to punch cards, but there were green screens involved). In her ‘down time’ she enjoys spending time with her family, reading, puzzles, and is a huge advocate for Autism.

Light it up blue!!