Vienna is old. They even, as my host Fin said, “dug up this area to show that we’ve been around since the Romans. We’ve been around for a long time.” The statues are gorgeous, the streets are clean and well-lit, and the buildings are HUGE. I mean massive, like, excessively so. There’s a thriving art scene, too, something called Museum Quarter and a plethora of government grants for really weird things. It’s hard work, though. Artists here must document, be accountable, and meet deadlines.

With such a thriving and supported creative scene, why did Metalab (oh, you want English? They care.) emerge, and why has it done so well? Metalab moved into their first (and current) space back in 2006, after a year of planning, becoming one of the first truly extroverted spaces in Europe.

Whoa whoa whoa – extroverted? How can a space be extroverted (or, introverted, for that matter)? Well, let me tell you about some things. There are clearly some activities that require a high barrier of entry in order to participate. Lasers. High voltage. Hacking the Gibson. And you want people around you can trust to not kill you, or in more traditional hacking, to not reveal your identity. And that means a pretty deep level of knowledge and trust. So, for a long time, and still in some places, you 1) have to know what you’re doing 2) know and care that there is a group of people out there doing similar things and 3) have access to those people. It’s a necessary system in some cases. But it does tend to leave out the n00bs. And thus, spaces like Metalab, extroverted spaces, are born.

Metalab has a board (as mandated by their structure under government regulations), a core mailing list which addresses actionable infrastructure questions, about 180 members, and an uncountable number of active non-members. They welcome anyone in so long as someone with a key is present. And I do mean anyone, including this blue-haired nomad. People don’t have to pay dues to participate, to host an area, or to attend a class. You just… show up. The (functional) assumption is that if you see value and have extra monies, you’ll support the space. And it works.

Some people do have issues with the self-organized structure, however. They ask who they should talk to before moving ahead with an idea, if they can move a table, if they can start a project. Michael, one of their board members, seems to enjoy the fact that some members don’t know he’s on the board, to the members he needs to guide towards the do-acracy model of the space. That model of activity has produced such projects as the Graffiti Research Lab, with their famous L.A.S.E.R. Tag.

GRL is no longer what he’s most proud of, though. That would be the recent conversations around things like geek depression (that’s him with the crazy hair. No, the other crazy hair. Not Mitch), queer hackers, and politics. He says “it’s like the hacker movement is finally growing up – realizing that we’re people, preparing to care for each other through coming issues. We’re turning these spaces and communities into more positive environments.” He’s also excited about the constant international exchange happening at spaces, specifically Metalab. The core crew of hackerspaces.org are either current, past, or honorary members of Metalab.

This is one of my favorite examples of a space that blurs the line between “hacker” and “maker.” It’s rather obviously about more traditional hacking models, but also takes an active role in the creation and re-appropriation of tangible objects. They are political but accessible. The phone booth is their logo. It stands for many things. Public infrastructure (what hackerspaces should be). Changing into a superhero (or your true self, Kal-El/Superman/Clark Kent arguments aside). Matrix reference (connections between a perceived and an actual world with battles to be fought). Phreaking (one of the original forms of hacking). Metalab took theirs to Camp in ’07 and hooked up to DECT network, and again in ’11 as well as HAR.

Check them out the next time you find yourself in Vienna. 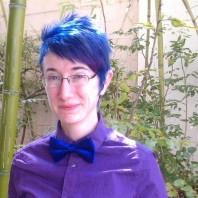 Willow Brugh has been an active participant in the hacker and makerspace community since 2008, giving her purpose towards distributed systems, engaged citizenship, and mutual aid. With heavy involvement in Maker Faire, Random Hacks of Kindness, and the SpaceApps Challenge, Willow’s main skill is “getting out of the way.” She loves seeing how ideals which thrive online, such as transparency and collaboration, manifest in these spaces and events. Willow has also been known to give candy to individuals from more traditional approaches to entice them towards these different models of engagement.