The second annual Cleveland Mini Maker Faire is coming up on March 29.  Faire organizer James Krouse shares why  Cleveland is emerging as a real “contender” in the quest for Maker City stature, with a plethora of makerspaces, startups, industrial lineage, and more.

In a recent Slate article, Mathew Yglesias proposed moving all the big tech firms from the Bay Area to Cleveland. It’s a pretty well-informed piece that gets beyond the tongue and cheek suggestion of Google moving here…kind of:

All you need is a city that has bigger problems than douche-y Facebook posts, creating plenty of room for local housing investment to become a win-win rather than an engine of displacement. Cities such as Buffalo, N.Y., or Pittsburgh come to mind, although unlike Detroit and Cleveland, they lack a major airport. Plans to save Detroit, however, are a bit cliché at this point, and I worry that any tech hub you tried to build there would naturally drift over to Ann Arbor, Mich., anyway. But Cleveland’s got plenty of affordable housing, plenty of available office space, flights to every important North American city, and even its own Federal Reserve bank.

Whether it is coverage of the surprisingly good food scene (the New York Times has continuous amnesia on this topic) or favorable rankings of world-class institutions like the Cleveland Clinic and Cleveland Orchestra, the world seems to be composing a new tagline for our city. Cleveland: Better Than You Think.

But “Better Than You Think” isn’t good enough. It doesn’t do justice to what the area is capable of.  This region is more than a blank slate of cheap housing that exceeds expectations of a good latte and celebrity chef nose-to-tail cuisine. This is a community of makers and that could very well define this region for the 21st century.

“Maker” might be an odd choice to describe Cleveland because  the term still elicits a lot of head scratching here. We’re holding only our second-annual Mini Maker Faire this year (March 29) and most people need clarification on what exactly a maker is. This isn’t a town that jumped onto this  (or really any) trend early. But Cleveland does embody what making is all about. So trendsetting aside, the area could very well be poised not to inherit the current Silicon Valley, but to define what the next Silicon Valley will be.

Stay with me. The maker movement’s hobbyist culture is similar to the one that gave birth to the personal computer, and this region may be the perfect place for it to transform into a game-changing economic driver. That’s a big maybe, but the right things are certainly happening here for it to be possible.

For example, the Fab Lab network here is one of the strongest in the nation.  Within a 45-minute radius, Clevelanders enjoy largely free access to several centers of design software, laser cutters, 3D printers, CNC equipment…all the resources you need to make (Case’s ThinkBox,Cleveland Public Library’s TechCentral, LCCC, MC2 High School, and , the Mobile Fab Lab, EHOVE and America Makes to name a few…)

On top of that, there is an impressive list of corporations that supply makers of every stripe.  From Jo-Anne Fabric to Creativity for Kids to industrial giants likeLincoln Electric and to startups like Tiny Circuits and Maker Gear.  There is also a strong base of engineering and industrial design firms based here that provide the day jobs for many of our makers.  Places like Parker Hannifin and Nottingham Spirk.  Remember, the people who work at these places are just as likely to be Makers as the Makers they supply.  This human capital is every bit as important as the technology.

Northeast Ohio also has a making culture that never really died.  For all the talk about the demise of American  manufacturing, we are still churning out everything from MRI machines to aerospace components to Jeeps. For a really good understanding of the scale we’re talking about, read Tim Heffernan’s Atlantic article profiling The Fifty, a 50,000-ton forging press at Alcoa in Cleveland:

What sets the Fifty apart is its extraordinary scale. Its 14 major structural components, cast in ductile iron, weigh as much as 250 tons each; those yard-thick steel bolts are also 78 feet long; all told, the machine weighs 16 million pounds, and when activated its eight main hydraulic cylinders deliver up to 50,000 tons of compressive force. If the logistics could somehow be worked out, the Fifty could bench-press the battleship Iowa, with 860 tons to spare.

It is this power, combined with amazing precision—its tolerances are measured in thousandths of an inch—that gives the Fifty its far-reaching utility. It has made essential parts for industrial gas turbines, helicopters, and spacecraft. Every manned U.S. military aircraft now flying uses parts forged by the Fifty. So does every commercial aircraft made by Airbus and Boeing.

Talk about making! This is the kind of making that we thought we had lost and have found again in our basements and garages. What a joy to find a silent iron giant forging the jet age in your own backyard. Hook up that industrial base still chugging away to the basement inventor/maker and you have some serious potential.

These connections are happening in weird and wonderful ways. For example, I’m currently hosting a hangout with NASA Glenn on celebrating 50 years of Centaur (an interplanetary workhorse), and I’ve recently been in discussion with the Cleveland Orchestra and Case’s ThinkBox, as well as with the Cleveland Clinic, about Makers and Medicine. I have worked on mashups between astrophysics and ceramics, biomedicine and dance, composers and NASA engineers. When Arduinos meet industry and medicine, game-changers happen.

Cleveland has not so much embraced maker culture; it embodies it. Tech firms shouldn’t look here just because there is cheap housing and good restaurants. They should take note of a place that is connecting the past with the future. The next big thing just might grow out of a connection between the casual maker, the startup entrepreneur, and that metaphoric iron giant.

No one can predict the future, but the next big thing just might grow out of the Maker movement.  It’s exciting to live in a place that is poised to be its home. 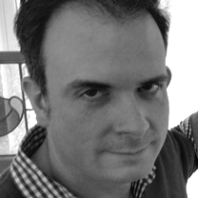 James Krouse is a playwright, author, and new media consultant.