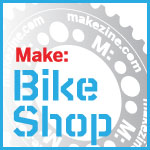 From garage conversions to hot commercial products, electrified tall bikes to “stealth” electrification, we have covered a lot of electric bike stuff over the years. These are the ten posts that have generated the most traffic since we started collecting data back in 2008. If you’re thinking of undertaking your own homebrew bike electrification this list should be a pretty good place to start reading. Enjoy!