For Your Next Project, Shop Surplus for Affordability and Creativity

For makers, the budget for a new project can crush a great idea before it even begins. The cost of new parts bought at retail prices could make an experiment too expensive to pursue. A big project I worked on recently would never have happened if it were not for donated time, free expert advice and inexpensive surplus parts. Knowing our needs, my friend Ian suggested we look for supplies at a place called CTR Surplus, in central Ohio. He purchased some specialized electrical components there for his Tesla Orchestra project and thought CTR might have what we needed. Not only did they have the parts we were looking for in stock, but their inexpensive price allowed us to experiment with an otherwise crazy-expensive idea.

My associate Mike O’Toole and I recently took a snowy trip to explore CTR’s stock, which changes daily. We talked with John Haines who manages the operation at this unassuming 30,000 square foot warehouse. Assistant Manager Michelle Mosier joined us and gave a brief history of CTR Surplus: Campbell Technological Resources started in 1988 as a recycler of precious metals sourced from outdated medical equipment. The surplus side of CTR began in 1994 after one year of building up an inventory of usable parts; John had noticed that even after the metals were removed there were still parts left over that could be re-used.

I asked John about who shops at CTR. “Our customers were from [the] industry and then evolved to tinkerers and computer people wanting to build or repair computers,” he said. CTR has customers from across the USA who shop via their website, eBay outlet and the retail store. “Precinct 13, a local special effects company, is one of our customers.” “Students making battlebots stop here for parts,” Michelle added. “Our parts have been in a few of the winning robots!”

Clearly, John and Michelle welcome makers. “We give someone the ability to experiment because they can financially afford to fail,” John said. He then took us through a series of rooms in the warehouse to show us how products end up on shelves or get listed on eBay. Typically, an unsorted and mad array of things stacked on a pallet and wrapped in cellophane arrives. “It’s like Christmas… we’re not sure what we’ll get coming in,” John said. Inquiring about some of the more odd things they had seen in their deliveries, Michelle answered, “Baby incubators.”

At the initial sorting process, staff figure out what they’ve received and if there is a market for it. The eBay group does research, pricing, and listing on eBay and the CTR website. “Everything has a lifespan,” John explained. “Sometimes it’s a year or two. We were able to resell DVD drives for a while, but the demand is dropping off. The products past their cycle are recycled for metal and plastic.”

Mike and I then explored the showroom and found things like shelves stacked with LCD screens, huge bins of castors, nylon rope, ordinary cables and even exotic looking instruments. The possibility for creation at CTR seemed limitless.

John left us with a great quote from Thomas Edison. “To invent, you need a good imagination and a pile of junk.” He paused, then said, “We’ve got the pile of junk.”

It feels good to find new uses for things that would have otherwise been victims of our increasing technological churn. Parts and supplies that would likely be in a landfill if it weren’t for people like John, Michelle, and the crew at CTR who are intelligent recyclers.

Ed. note: What about you? Is there a surplus or re-use center near you that you frequently shop at? Share your experiences and stash spots in the comments below! 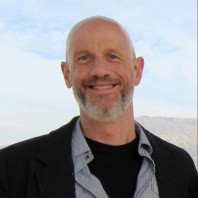