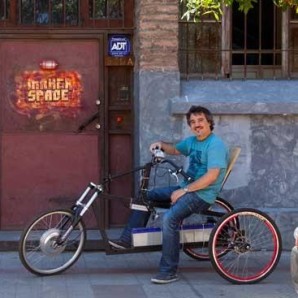 Beside being a man with a weird name Tiburcio is a serial Entrepeneur. He moved to Chile in 2003 to found Wanako Games, a leading video game studio developer acquired by Vivendi Games/Activision in 2006. In 2009 he founded Atakamalabs, adquired by DeNA in 2011. Also a hardcore Maker he builded a workshop in his house with 3D printers and laser cutters. Because he felt lonely (and by recommendation of the marital counsel) he decided to open the STGO Makerspace. He is also founder of idea.me, a crowfunding service focus in latin america creativity.

Some months ago I finished an original Space Invaders restoration project, but as you can see on the picture on...