Build Your Own Festive Balloon Archway

I’ve traveled around the world creating art with a very unusual medium. I fold air in specially prepared latex containers. That’s right: balloons. At Airigami, we don’t deal with tiny balloon doggies, or even a few balloons forming hats, but massive artistic installations involving up to 100,000 balloons. The same basic twists used to make the standard balloon dog are used for these creations. But with endeavors this large come countless engineering challenges, from forming rigid structures out of light-weight and flexible materials, to constructing safe rigging that will support hundreds of pounds worth of balloons, to calculating gas usage and airflow requirements of inflation equipment. What’s more, the unusual shapes balloons come in make the challenges even greater. Traditional approaches to building don’t necessarily apply when, instead of bricks and 2x4s, your smallest elements are shaped as spheres, rounded-cylinders, and mouse heads. In the movie Raising Arizona, Evelle poses the question, “These blow up into funny shapes and all?” The answer is, “Well, no … unless round is funny.” Indeed, all balloons are funny-shaped when considering their use as a building material.

Balloons have been around since at least 1824, when Michael Faraday used rubber balloons in his hydrogen experiments at the Royal Institution in London. Rubber manufacturer Thomas Hancock fabricated balloons as toys the following year, in a DIY kit containing a bottle of rubber solution and a condensing syringe. These versions were affected by temperature, but J.G Ingram’s vulcanized toy balloons in 1847 were not, and are considered the precursor to modern toy balloons.

Depending on the project and the resources available, balloons are most often filled with air, helium, or nitrogen. Most Airigami projects use air. Everything from small hand pumps, similar to the pumps used to inflate sport balls and bicycle tires, through large air compressors are used.

Getting Started: A Balloon Arch

Building anything large requires some basic understanding of how to make simple structures. The first of these is the basic balloon arch. The traditional balloon arch uses some non-balloon material as an inner framework. (Not all balloon structures need that inner framing material. This is just an easy way to start.)

Option one is smaller and less expensive, forming an arch about 6′ wide at the base. Option 2 can fill a large room and look much more dramatic.

Round balloons aren’t quite round. Size is determined by diameter across the shorter dimension.

In order to inflate all balloons to the same size, we can set up a template, such as making a hole in a cardboard box the size you want your balloons to be. For a smooth looking arch, it’s important that all balloons are inflated exactly the same.

We can do arc length calculations but to simplify the process at this stage, we’ll use some basic guidelines that people in the balloon industry have used for years for quick estimates. There are three possible relations of the height and width:

Step 1. Fully inflate two balloons and tie their necks together.

Step 2. Repeat so you have two pairs of balloons and twist them together at their necks.

Step 3. Slide the quad into your pole and lock it in place by twisting two balloons around each other to trap the pole inside twisted balloons.

Step 4. Continue to add quads, placing each successive quad as close to the previous one as possible.

You can probably already see how the inner framework that we build on can be any shape imaginable, allowing us to not just build arches, but letters or other complex shapes. Several of these can be joined together to form any kind of massive sculpture you can image. The rigid pole in the center can be replaced by string or fishing line to make a more flexible creation.

Building Without Frames: How to Form a Wall

Airigami projects frequently use a brick wall pattern that’s built with non-round or “airship” balloons. Most airship balloons, those that form long tube shapes, are described by a three-digit number. The first digit is the diameter of the tube. The last two digits are the length of the balloon when fully inflated. For example, a 260 will inflate to two inches in diameter and 60 inches long. (Note that these numbers are approximate and vary by manufacturer. For accurate calculations, you’ll want to measure the balloons you have.) An airship will always inflate to its full diameter (a 260 will always inflate to 2 inches in diameter), but the length can be varied. For this project, you will never want to inflate an airship fully. Leaving an uninflated tail at the end is critical for tying balloons end to end or to allow a balloon to be twisted without breaking. It is recommended for this project that a 646 not be inflated longer than 18 inches and a 321 not be inflated more than 6 inches.

Option 1 is smaller and less expensive. Option 2 can fill a large space and look much more dramatic.

Here’s a video demonstrating the process:

Step 2. Tie the strings of balloons together at one end and twist all pairs of balloons so they look like the diagram.

Step 3. Inflate several 260 balloons and twist them into all of the joints between the 321s or 646s.

Step 4. Repeat Step 3 so that you have two matching rows of “bricks” with 260s sticking out and join them. The second row is offset from the first by half a brick. The 260s line up so they either pass between two bricks or get twisted between bricks where they are tied together.

Step 5. Make additional rows of bricks as in Step 2 and add them as needed for the height you want to reach.

Any circular wall can be made with only a small modification to the above instructions. Before, we used just two straight strings of balloons. Now the strings will be tied into circles. Note that the inner circular string has shorter bubbles than the outer one to force it into the shape we want. I’ll leave exact measurements to the reader.

Inner structure – such as flexible pole or fishing line, depending on how much stability or flexibility you need 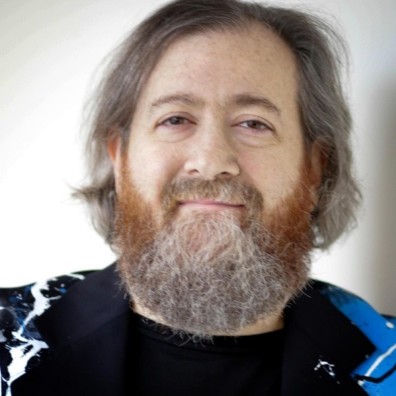 Larry and his partner Kelly Cheatle are the masterminds and lead artists behind Airigami. They travel the world, designing and constructing massive artistic balloon installations of all kinds.