Stitch a high-tech wall hanging that doubles as a nightlight.

I love any activity that promotes creativity and discovery. To me, tinkering with electronics is the same as stitching a picture, and combined they can tell a story that crafters and gearheads both want to hear. This picture of a frog catching fireflies is embellished with lights that bring the bugs to life. Conductive thread is the magic ingredient, bridging the gap between rigid metal and soft floss. To make a stitched scene light up, combine traditional embroidery techniques with a few common electronics components. The possibilities are endless, and the result is an artful conversation piece.

This project has an associated CRAFT Video.

This project starts like any other embroidery: trace the pattern onto the fabric with carbon paper, then pull the fabric taut in the hoop with the design centered.

Backstitch along the lines of the pattern until it’s complete.

For more instruction on how to embroider, see 101: Embroidery in CRAFT, Volume 06.

Prepare the switch and LEDs for sewing.

Next, remove the stitched design from the hoop and drill a hole through both rings of the hoop wherever you’d like the switch to be.

Thread your needle with conductive thread. Hold the LED in place with one hand. Stitch over and around the square-coiled lead many times to make a strong mechanical and electrical connection.

Following the wiring diagram, backstitch a line to the positive battery connector. Hold the battery holder in place with one hand, and sew its positive (+) terminal in place with the other. Stitch it as you did the LED, with many stitches through the terminal’s hole.

Without cutting the thread, backstitch a path to the other firefly LED, and sew its square-coiled lead as you did the first. Tie off the thread and weave it back along the stitched line, then cut it. This helps prevent short circuits from fraying ends.

Sew the circular, negative leads of the LEDs together. Be sure not to cross the positive trace.

Center the design in the embroidery hoop, with the 2 holes aligned and the fastening hardware at the top (a little wiggling may be required).

Directly over the holes, poke a hole in the fabric with scissors or an awl or seam ripper. From inside the hoop, push the threaded post of the switch through the hole with a few turns of the wrist, then secure it on the outside with its nut.

Sew 1 lead of the switch to the negative conductive path (the path not attached to the battery), with many stitches for a good connection.

Cut the thread. Backstitch a line from the other switch lead to the negative (–) battery connector terminal and sew through the hole in the terminal. Cut the thread.

Check your circuit against the diagram and watch out for fraying thread shorts. Set the switch to the Off position. Insert the battery in the holder, with its + side facing up. Turn the whole thing over and flip the switch. You should see the light! If you don’t, turn it off and check for good connections and shorts.

Trim the fabric within 1 1/2″ of the edge. Use regular thread and a running stitch to gather the edge on the backside. Now hang it and enjoy!

1 Embroidery needle – and floss in yellow, green, pink, and black 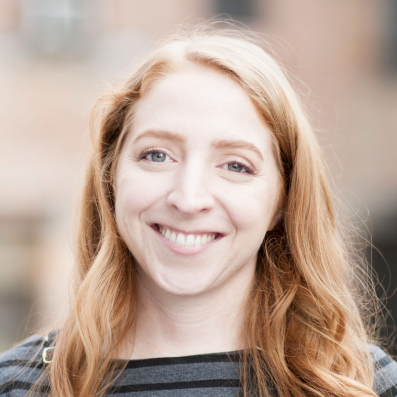 Becky Stern is a Content Creator at Autodesk/Instructables, and part time faculty at New York’s School of Visual Arts Products of Design grad program. Making and sharing are her two biggest passions, and she's created hundreds of free online DIY tutorials and videos, mostly about technology and its intersection with crafts. Find her @bekathwia on YouTube/Twitter/Instagram.