This project first appeared in MAKE Volume 38, on page 97.

I was watching one of the new short videos for the GoPro Hero 3+ Black Edition the other day, and a shot of a skier had a camera move that spun around the skiers head, if you can picture it, my jaw hit the floor, followed by a bunch of speculation how the camera move was made. My brother Ty tipped me off to a shadow, that showed a helicopter like helmet attachment, where the camera was mounted on castor like mount, allowing the camera to spin around the skier, like bullet time from the matrix movies.

I had to build one, and with a simple goal of matching the shot, and making it as cheap as possible. This was all done with a trip to the hardware store, and about twenty minutes in the garage.

Check the above video at around 1:00 in for the swivel cam shot. Drill a 1/4″ hole half an inch from one end of the 24″ length of PVC. This will be the mount for the camera.

Insert a carriage bolt through the hole in the 24″ length of PVC and attach the GoPro 3-Way Pivot Arm, with a washer and wing nut on the other side. If the bolt doesn’t fit, use the 1/4″ drill bit to make more room on the arm.

Drill a 1/4″ hole through the middle of the PVC coupling.

Prepare the counter-weight and the caster. Insert the bolt into the 18″ length of PVC and secure with electrical tape.

Remove the wheel from the swivel caster with a Dremel.

Attach the caster to the PVC coupler with a carriage bolt, washer, and wing nut. Play around with the tightness. You might keep it a little looser for more movement in your shots. I prefer it to be kept tight, locking down the camera angle. Attach the 18″ and 24″ lengths of PVC together via the PVC coupling.

Insert the castor into the hole in the top of the helmet. If needed, secure with an appropriate nut on the inside. Mine fits pretty tight in the top vent of my Pro-Tec bike helmet.

Attach the camera to the mount, and shoot away!

Swivel caster – Ideally, one with a single bolt. I found one at Harbor Freight for around $6.

Bolt – for the counter-weight 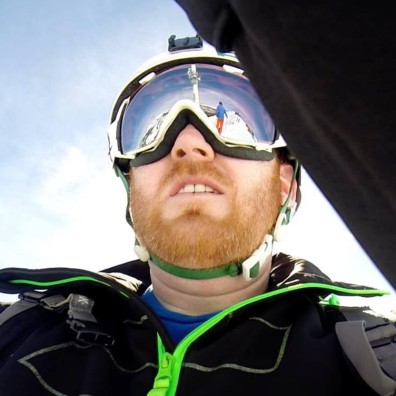