I’ve been working on a walking robot (term used loosely) based on Theo Jansen’s Strandbeest for quite a while. Once I decided to scale things down and cut small linkages for it on my CNC router, I soon had a mechanism that I dubbed the “StrandMaus,” and it actually looked like it might work. The problem was actually controlling it.

The most obvious solution for control of something like this that uses two motors would be to take apart a remote control vehicle, such as a tank, and wire them where the wheels or treads would normally go. Unfortunately, may of these toys use relatively heavy batteries, and, importantly, I didn’t have one readily available.

What I did have available was a cheap quadcopter — an Estes Proto X nano with a burned out motor. It came with a tiny controller that was a little smaller than I prefer for quadcopter use, but was perfect for something slow-moving. This meant that if I didn’t hit the correct stick at the right instance, I could generally do it in the next second or five without consequence. Here’s a video of it actually working; read on for how to control something like this yourself!

Quadcopters have counter-rotating blades that are varied in speed to turn left and right. There’s no reason I couldn’t wire the quadcopter’s left-front motor to the StrandMaus left motor and the right-front motor to the right ‘Maus motor. In theory, this should be able to turn the ‘Maus just like it would a quadcopter, though there would be no accommodation for reverse. I had my doubts as to what would happen given the physically larger motors, but it turned out to work quite well.

If walking legs aren’t your thing, this concept could be used with any vehicle that needs to control two motors (and doesn’t have to reverse). Besides that, with its self-contained battery source, this concept could be used for anything that needs very simple low voltage control. It should go without saying that this type of control is highly experimental, so use your own judgement with this hack, and don’t use a quadcopter you can’t live without!

First, remove your motors and verify that you’re getting voltage out of the quadcopter. I used the front two motor connections, but the back two should work as well.

Wire the walker motors you will be using to each positive and negative connection that would normally go to the quadcopter motors.

Depending on your physical situation, it may be best to mount them before wiring. Increase quadcopter throttle and you should see each motor start to spin. Move the stick that normally turns the ‘quad left and right and the speed should vary proportionally between the motors.

If the direction is incorrect for your application, switch the positive and negative leads to reverse direction.

If you haven’t already done it, mount your motors to power your walker’s legs. This will obviously vary depending on your design.

I used zip-ties and carefully placed holes to let me strap the motors and quadcopter down, while allowing for the wires to go to the motors.

Make sure that the power switch as well as any charging needs remain accessible.

Once things are mechanically in place, turn your former quadcopter on and increase the throttle.

You may have to tune the motor outputs just like you would when tuning an actual quadcopter. If you’re like me, you likely have much more work to do to get things anywhere near where your ‘bot can walk, but once things are working, you’ll have a truly unique mechanism that you can enjoy and use to confuse your pets!

Zip ties – or other means of mounting the motors 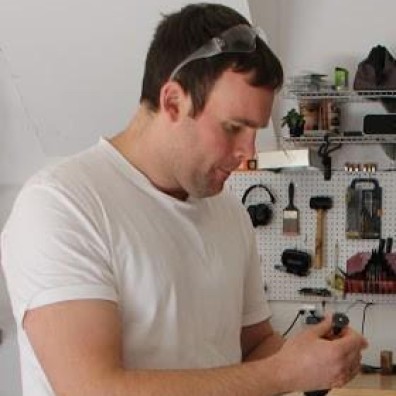 Jeremy is an engineer with 10 years experience at his full-time profession, and has a BSME from Clemson University. Outside of work he’s an avid maker and experimenter, building anything that comes into his mind!