A ghost with glowing eyes hovers in the window. Watching. Always watching.

Wondering what just went bump in the night? The glowing eyes of soda-bottle ghosts are a dead giveaway. Here’s how to make it!

Tape an LED to a battery and you’ve made a “Glowie.” This simple circuit is the secret ingredient for making glowing creatures like the ghosts above.

2. Use scissors to cut a piece of tape, and tape the LED legs and battery tightly together.

Depending on your materials, you can tape up to three LEDs onto a single 3-volt battery and get several hours of light from the assembly. A single Glowie or Throwie can last up to three days. A double or triple Glowie or Throwie won’t last as long, but it can make things a whole lot more colorful! The more LEDs you add, though, the dimmer they’ll be, since they share one battery. Experiment to see what works best for you.

With your scissors or craft knife, carefully cut off the top of the bottle (with the bottle cap on!), just below the neck.

To make the eyes, tape or hot-glue the double Glowie on top of the bottle cap.

Flip the bottle-cap assembly upside down and insert it into the cut opening in the bottle. The cap—with glowing LED eyes attached—will be inside. Tape the cap in place, making sure it doesn’t fall into the bottle.

Cut a length of clear plastic line or wire. Poke it down through the center of the cloth, and then up again an inch or so away. Knot the ends, making a single loop attached to the fabric. Then tape or hot-glue the knot to the top of the bottle and pull down the cloth so it covers the bottle.

Plastic bottle with cap (any size) – one for each ghost

One double Glowie for each bottle, with the LEDs set next to each other (for the eyes) 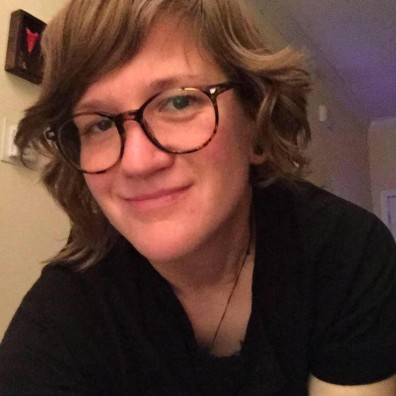