Designed for graduates of the Lego Space Corps

Here’s a little project that we’ve been working on for a long time: a custom-painted leather flight jacket featuring the “Classic Lego Space” logo. (Yes, I totally spent years serving in the Lego Space Corps!) If you’ve ever wanted to make your own painted leather jacket — whatever the theme — here’s how to do it.

For this project we used Angelus leather paints, which are highly flexible acrylic paints from the Angelus Shoe Polish Company, designed specifically for painting items like shoes and jackets. We used black, metallic gold, white, and red paints, which are available in 1oz and 4oz (and sometimes larger) bottles. We ended up using less than ½oz of each paint color in this project.

Besides the paints, you’ll also need their “Leather Preparer and Deglazer” (for which some people simply substitute acetone), and a clear acrylic top-coat finisher. We also used a couple of different sized natural-hair paintbrushes.

The jacket is a “black current issue A-2” leather flight jacket from US Wings, an updated version of the iconic A-2 jacket, famously used by pilots in WWII and well known as the classic substrate for painted bomber jackets. We felt black best fit our outer-space theme. The “current issue” version of the jacket has the same extra pockets as current-issue military A-2s. Look for one with a solid, one-piece back, so that there aren’t any seam lines where you’ll be painting.

It’s certainly possible to start with a lower-cost jacket, or to get a used jacket for much less. However we are following a piece of advice that we learned from our friends in the art car community: If you’re going to invest the time in decorating a car, it’s a good idea to start with a new one so that it lasts longer and you have fewer maintenance issues.

The design is the “Classic Lego Space” logo, no longer in use but prominently featured in popular Lego sets like the Galaxy Explorer and on space-themed mini figures from 1978 to 1987.

If you look closely at the pictures of the Galaxy Explorer and mini figures, you might notice that there are actually two versions of the graphic from that era. One, found on larger bricks and flags, has a light-yellow moon with darker craters, while the other, found on small bricks and mini figures, has a metallic gold circle without craters. Since the design on the jacket is large, we went with the cratered version, but exercised a little artistic license to use light and dark metallic gold, rather than yellow, for the two colors. Create the design that you would like to apply to the jacket. For each color in your design, cut a stencil out of cardstock. You can use simple tools like a pencil and a hobby knife for this step, or take more of a high-tech approach. For our design, we used high-resolution pictures of Lego bricks to model the logo in Inkscape (inkscape.org), and laser-cut the cardstock stencils. You may find it helpful to use your cardstock cutouts as mock ups to see how they will look on the jacket in a variety of sizes and positions. Step #3: Paint a base layer Allow the paints to dry overnight, and add the final top coat — a thin and colorless acrylic finish that dries clear. The finisher is available in five different luster levels, from matte to glossy. We used “Satin,” but found it to be glossier than the rest of the jacket, so we’d recommend “Flat Top,” listed as having the lowest sheen. Apply 2 coats of the finish and allow it to dry overnight.

A final word about the paints: These paints are (as advertised) incredibly flexible and well matched to leather. You can flex and fold the material, and the paint goes right along with it, flexing and folding as though it isn’t there at all. Neat stuff! 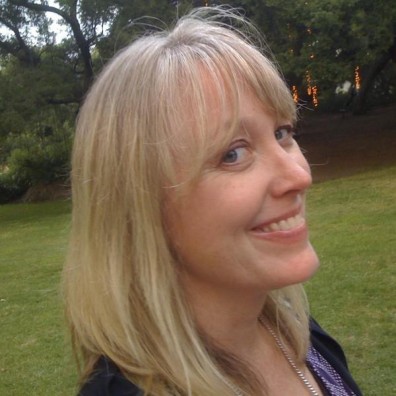 Laurie is an editor for MAKE.