After reading about ferrofluids (liquids with magnetic properties) in MAKE, I started trying to make my own. I learned how to electrolyze water with iron electrodes to create magnetite — a jet-black iron-oxide — and realized the same process could be used to make simple metal oxide pigments. Instead of just buying supplies at the art store, I wanted to make a painting truly “from scratch.”

Electrolysis is the process of using direct current to cause a chemical reaction that would not otherwise occur. It requires an electrolyte, 2 electrodes, and a current source. It has many applications, but the most common is probably electroplating, which is used, for example, to coat a large piece of cheaper metal with a small amount of a more expensive one that is more attractive or a
better conductor.

My pigment-making process is dirt simple. The current source is an old cellphone charger with the plug cut off. The electrodes are pieces of common metal hardware, and because they’re identical I don’t have to pay attention to the current’s polarity. The electrolyte is just salt water.

The reaction takes 3 hours and produces a brownish-black mixture of iron oxyhydroxides. It can be repeated with copper electrodes to give a vibrant orange.

This process creates a small amount of hydrochloric acid in the dish. It won’t be a lot, but if you keep your hands submerged in it long enough, you could get a rash. It also creates a small amount of chlorine gas, which is poisonous! Work on a small scale in a large, well-ventilated room. Do not attempt to use this process to make large quantities of metal oxides. Finally, it creates large amounts of hydrogen and oxygen gases, which can be explosive if allowed to build up. Again, stick to small scales and work with plenty of ventilation, away from ignition sources. Water on its own is a poor conductor, so we add an ionic chemical — in this case sodium chloride — to increase its conductivity. Pour a small amount of salt into the glass dish. Fill about halfway with water and stir to dissolve. Plug in the charger. You should see bubbles coming off the screws. Stir occasionally with a small paintbrush, breaking up any chunks and brushing off the electrodes. Unplug the charger after 3 hours. The water should begin to turn yellow within minutes. After an hour, you should see black iron hydroxide settling on the bottom of the dish (photo 2). The bubbles will probably have lifted some to the surface, where it will turn red or orange. After 2-3 hours, the water should be almost completely opaque (photo 3). The cathode should be covered with scale. 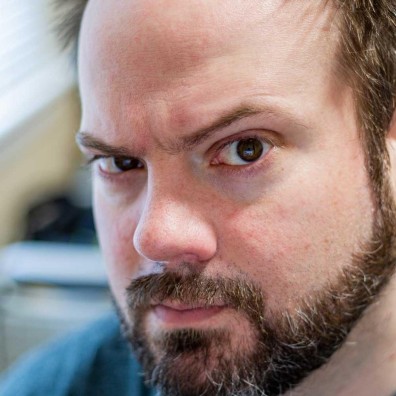 Sean T. McBeth is a hobbyist, software engineer, photographer, and stalwart member of Philadelphia hackerspace Hive76. He can be reached at sean.mcbeth@gmail.com.