Chances are, you are reading this on some kind of mobile device and if you’re anything like me, it will be a tablet, as I can’t bear the tiny smartphone screens.

Now tablets are great, but the only bugbear I find is reading or watching on them while doing something else can be a pain, as I find myself propping it up on whatever is at hand – so I decided to make an oak tablet stand.

To start with, I planed up 3 pieces of oak from scrap, which was lying around after making garage doors.

I’ve gone for a chunky base so there is a bit of weight to the stand; in my mind, there would be nothing worse than to build a great tablet stand only for it to tip over should you wish to start typing on the tablet, so the chunky base solves that problem.

Also, it’s worth noting that the above sizes are the finished PAR (Planed All Round sizes) so if you’re starting with rough sawn timber, you’ll need to allow for this.

Optional extras that I’ve also used are some felt for an underside to the base and teak oil to give the oak some protection.

Step #1: The Tablet Stand Base I’m joining the back support to the base using a combination of housing joints (or dado joints).

Mark a center line across the width of the base (155mm from the edge gives the center), then mark a line 10mm from either side of this center line. This gives us the 20mm thickness of the back support that we’ll notch out in a second.

From the rear of the base, mark off a line 80mm and then a line 40mm at right angles to the centre line (see picture).

While we’re at it, I’m also going to mark out a line 25mm in from either end of the base; this is for a little cove-type molding we’ll put in later. The 25mm lines at either end are the point at which the molding will end (I’m using this molding to stop the tablet from sliding off the base).

I then notched out 40mm from the rear of the base by 20mm wide by the complete depth of the base (35mm); if you’ve got a steady hand, you can do this carefully on a band saw.

The remainder (the additional 40mm that makes the total of 80mm) becomes a housing joint; this is 18mm deep x 20mm wide. For this, I scored around the lines with a chisel and mallet, and then cut down to a depth of 18mm with the same chisel. This can again be cut mainly on the band saw; don’t worry too much about the long angle looking a bit untidy once cut — give the angled edge a quick belt-sand to tidy up any rough parts. Having said that, it won’t be seen anyway.

The rear support then slots into the notch in the base (the angled side facing towards the front of the tablet stand). Making the backrest is simple enough, as the image shows. The most awkward part is the 7mm deep housing on the rear; this wants to be 20mm wide x 145mm long from the shortest (back) side, as it needs a 32-degree angle cutting on the bottom.

Using an old paint tin, I’ve put a little round cut on the top. I cut it on a band saw and then tidied up with a quick sand.

This backrest then sits over the angled part of the back support.

Step #4: Prior To Assembly Before we put the oak tablet stand together, we need to give it all a quick sanding and also add the ogee molding around the front edge and the two sides; I’ve not done this on the back, as most of the time it will be up against something and not seen.

The last thing to do before gluing up (unless you’re turning it into a docking station — see below) is to put the cove molding on the base; this is present to stop the tablet sliding off. The position of this on the stand I’m making is 50mm in from the front edge of the stand to the back of the moulding; do check it’s the same on your stand and you can do this by assembling the stand together dry (without glue) and seeing where the front bottom part of the backrest meets with the base. It’s best to use a stop on a router set to this dimension, so if you have one, dig it out now.

On my stand, the cove molding stops 25mm from either side, so either mark 25mm with a pencil (on both ends of the stand) and stop the router at this point or alternatively, set a stop up. If you decide to turn the tablet stand into a docking station then now is the time to do it, before everything is glued up. This is quite fiddly to do; again, you’ll need to put together the stand dry (without glue) and sit the tablet upon the stand to check the position of the charging socket.

Once in place, mark on the base the position of the socket (on the tablet) in relation to the base.

I’ve turned one of the Tablet Stands into a docking station for a Samsung Galaxy Tab 2, which requires a big hole. A hole of this size makes the tablet stand/docking station suitable for a variety of tablets and various generations of iPads. To cut this, I’ve used an 8mm drill bit to remove most of the timber. The two outer holes drill down approximately 14mm, while the two centre holes go all the way through the stand. These do have to be drilled out at roughly the same angle as the backrest, otherwise the charger stops the tablet from sitting right.

Like me, once you’ve drilled the holes you’ll probably find you need to ease them a bit with a chisel. Once I did this, I tidied them up with a small sander attachment on a Dremel (my new favorite toy at the moment).

This takes a bit of trial and error to get it right; ease off a bit, then check whether your charger will fit through and connect to the tablet sitting in the oak stand.

For the iPad Air, you can actually get away with drilling a large hole, as the 'Lightning' charger cable plug is quite small (certainly a lot smaller than the Samsung GalaxyTab 2). You can see how the Stand comes together in the images. To glue up, I’m using some polyurethane glue; this can be a bit messy so be prepared to wipe out any of the glue that squeezes out of the joints.

Apply glue all around the notch and housing joint of the base of the tablet stand, and also get some on the corresponding parts of the back upright, and then slide this into the base.

Apply two cramps on the rear; I find running a piece of timber, with a bit of old newspaper behind (which saves the timber sticking to the base), full length across the back of the base and then clamping this on to be the best.

Once the back upright is glued up and cramped into the base, glue up the backrest. Again, apply glue within the housing on the rear of the backrest and stick some on the angle part of the back support. Add cramps; remove excess glue and leave to dry.

Step #8: Running A Groove For The Cable (Docking Station) Once your glue has dried, turn the Tablet Stand upside down and, using a straight flute router bit, run a groove from the rear of the Tablet Stand to the hole where the charger wire comes through the base. To finish the oak tablet stand, I’ve used 3 coats of teak oil; this gives the oak a bit of protection from splitting and brings out the natural beauty of the oak.

Before applying the oil, check for any glue that has leaked through and is now dry; if there is any present then remove it. Give the tablet stand a hand sanding all over, then remove any dust.

If you’ve not used teak oil before, make sure your workshop is well-ventilated.

When applying the oil, use a lint-free cloth to rub it into the timber and allow plenty of time between coats. I often use some lint-free kitchen towel, but you can purchase lint free rags specifically for applying the oil.

You can buff the final coat of oil for a better finish.

The only part of the stand I’ve not oiled is the underside of the base, as I’ll be gluing felt here to avoid scratching any shiny surfaces.

Step #10: Applying Felt and Cutting It To Size For this, I’m just using a thin layer of PVA spread over the underside of the base. (A mention must go to Mrs. Simpson of Elfed School in North Wales for the PVA tip.) You can use a paintbrush to spread the glue if you like.

I’ve already cut the felt a bit bigger than the base and I’ve allowed approximately an extra 20mm or so in both length and width. We’ll trim this down once it’s dry.

Simply smooth the felt down onto the glued base. Once you’re satisfied it’s nice and flat, spin the base over and stand it up the correct way. The weight of the base is enough for the glue to grip the felt and base.

Once dry, I just trimmed the felt to size using a small pair of scissors. (I did try a Stanley knife, but scissors gave a better finish.)

Finally, cut the felt on the underside of the base to reveal the groove for the charger wire. You can either completely remove the felt over the groove or just make one cut to leave a flap present, which is what I have done. You'll find it keeps the wire in the groove quite well. The Tablet Stand can be used in portrait or landscape display. It's suitable for a variety of devices and using solid oak means it'll last long enough for future generations of tablets. 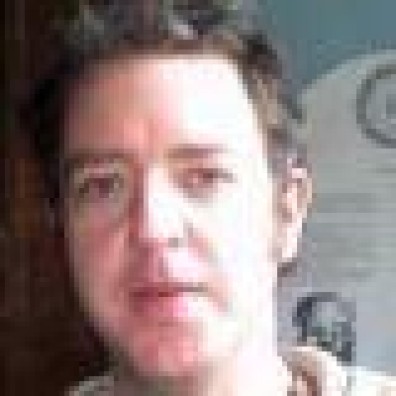 I'm a 30 something Carpenter/Joiner at Gate Expectations by Inwood, from North Wales, UK. I love the smell of sawdust in the morning!