3D scanning at home was nearly impossible without expensive pro equipment or DIY setups, until now. Consumer-grade scanners have arrived, based on two main depth-sensing technologies. Triangulating laser scanners project a laser line on the object, record it with a camera, and compute the triangulated position of the surface. Structured-light scanners project a pattern onto the object and calculate depth by measuring distortions in the pattern. We tested one of each to see how they work.

This kit from Germany’s David Vision Systems may feel like less than $675 worth of components — a Logitech webcam, Joby mini tripod, handheld line laser, cardboard calibration backdrops, and scanning software on a flash drive — but they integrate to make a complete laser scanner. You place an object in front of the calibration boards and shine the laser on it from various angles. The webcam captures the reflected laser light, and the software assembles the 3D model.

The kit yielded fairly detailed scans; we captured the shape of a quarter, but not its surface features. We found setup and use to be tricky, due to limited instructions and unintuitive software that requires you to align the scans manually, a tedious and time-consuming job. There’s no turntable, and dark objects scanned poorly, a problem common to laser scanners (some manufacturers recommend dusting the object with talcum or cornstarch).

It projects black and white patterns on the object and scans them with the high-def camera, giving it much finer resolution than the laser kit — we captured Washington’s profile and some lettering on the quarter — but it’s also far more expensive.

Regrettably, the SLS-1 lacks a turntable, a key feature that makes 360° scanning easier and more precise. (DIYers
have made Arduino-powered turntables for this scanner that reportedly work great.) Also, it uses the same tricky software as the laser kit, though the SLS-1’s instructions are much better.

Overall, this is a solid 3D scanner for fast, accurate measurements. Its quality surpasses laser scanners, but at nearly twice the price of a MakerBot Digitizer, the lack of an automatic turntable is something buyers will have to weigh.

This review first appeared in MAKE’s Ultimate Guide to 3D Printing 2014, page 96. Check out the full issue for more! 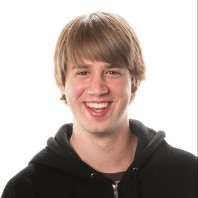