On a sweltering 90°F March afternoon, a crack team of makers assembled from around the world carefully negotiated a wide cobblestone intersection as vintage taxis and VW bugs whizzed by. Standing before us was an ancient 16th-century monastery whose stone walls once shielded the Mexican military. Makers entered where monks once tread as the heavy front gates were swung open to reveal an oasis of succulent botanical riches unlike any other in the world. Lead through the Jardín Etnobotánico‘s vast courtyard, we found a huge event tent adorned with familiar branding: Oaxaca Mini Maker Faire. We had arrived!

Under the tent and out of the direct gaze of the hot southern Mexican sun, the temperature was quite comfortable and a welcome reprieve from New England’s fickle spring. Looking around, there were 3D printers, drones, a VR headset, young geniuses building robots, circuit-bent and odd fruit-powered devices. And despite this strange setting, it was then that I realized: Hey, I’m at home! All Maker Faires share so many commonalities; at a glance, it might have been mistaken for a deep summer Faire in the States. It seems makers everywhere are genuinely interested in sharing new ideas and helping new audiences take ownership of the technologies that are changing our world.

The Oaxaca Maker Faire was no different, it was a great disseminator of information, providing a diverse audience a first look at cutting edge expositores (exhibitors) and their new and original proyectos (projects). Here in Oaxaca, all of this was evident that in the South as in the North, the Faires are pushing this hacedor (maker) movement in the same direction– adelante (forward)!

But what quickly set apart Mexico’s first Faire is the rich heritage and local flavor of Oaxaca. The all-star production crew at Centro de Diseño de Oaxaca could not have picked a better place for this Faire. Being the location of their home office probably made it an easy choice. The Botanical Garden, while absolutely beautiful with rugged and delicate flora, also exemplified the delicate balance of nature and modern life evident in the vibrant streets of Oaxaca. Small touches like the hand-cut papel picado (perforated paper) banners proudly proclaimed that this was a real homespun fiesta. A closer look at many of the exhibitors revealed a strong respect for the local culture and natural materials to a degree that you won’t find in many other cities.

Olla Sol harnessed the fierce sun in their solar cooking pot and shared a tasty black bean dish with Fairegoers. They’re looking to provide a low-cost cooking solution for people who lack access to the power grid.

Even one of the 3D printers had both feet firmly planted in local soil, Unidad de Protocolos AnaloGo was a completely analog, wooden 3D printer with mud as it medium – hand mixed right on the spot!

For Justin Emerson and myself – the group known as Burnkit2600, the Oaxaca Mini Maker Faire was definitely a special experience. We delivered our Bleep Kit Workshop to the largest and youngest single group yet. In no time at all, the mystic silence of the Botanical Garden was broken with the cacophony of 20 dual oscillator noise synths coming to life for the first time. It always leaves a heartfelt impression knowing that so many of these kids are having their first hands-on electronics experience with us. That feeling doubled when our host, Manuel Alcala later told us that several of the kids in the workshop were from a local orphanage. I hope we inspired them all to continue in the field with our fun and noisy little workshop.

As performing exhibitors, Burnkit2600 did what it does best. We presented a pile of our strange circuit-bent and handmade electronic instruments in a quasi-musical context. My circuit-bent semi-modular Yamaha QY-10 and Justin’s newly made Bleep Drums percussion synth were featured in our set of mellow, spacey grooves with heavy beats.

We worked out much of the brand new material the night before in an impromptu pick up set with Phillip Stearns at a sweaty local dive that Mico Rex had booked – what a great night! Our Maker Faire set culminated in a jam with other makers including Jorge Ramirez from the band Mico Rex on some live code data smashing, DigitArt‘s Adalberto Gómez playing a Kaoss effected noise synth of some kind, and a featured spot by a young drummer on the Blue Man Group-esque “Tubulum” PVC pipe drum made by the guys at Hacedores.com.

All in all, it was an exceptional experience for everyone involved. I think Mexico is ripe with talent and the Maker Faire scene is going to play a huge part in the lives of so many people there. I was particularly impressed with a few musical makers at the Faire and conducted some informal interviews with them, so stay tuned for that blog post.

0 thoughts on “Impressions of the Oaxaca Mini Maker Faire” 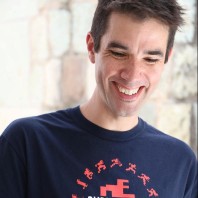 Thomas Uliasz is a electronic musician and creator of musical instruments. He is a founding member of the group Burnkit2600 and a proponent of all things musical tech. In addition to performing with and selling his creations, Thomas delivers talks and workshops on circuit-bending, instrument modification and simple sound circuitry.