There’s Something About Women and Science

It seems like every single day I read about a new report, initiative, competition, or program geared toward getting more women involved in science, or investigating why there are not more women in science to begin with.

Just a couple of weeks ago, on October 3, it was announced on culture and technology blogs such as The Mary Sue and Io9 that “Natalie Portman and Marvel are joining together in hopes of inspiring an entire generation of Jane Fosters (Jane Foster, a physicist character played by Natalie Portman ). The Ultimate Mentor Adventure is a program/contest that wants to connect girls 14 and up to meet, work with and learn from the most successful women in science, technology, engineering and mathematics (STEM).”

This seems on the heels of Natalie Angier’s fascinating article in The New York Times on September 2, 2013, “Mystery of the Missing Women in Science“. In it she quotes studies proving girls do as well as boys in math and science and at times even do better, but they still can’t explain why there are so few women in science in comparison to men.

Joseph Price of Brigham Young University and his colleagues reported this year that the gender gap in high-stakes math competitions disappeared simply by adding more rounds to a contest. Boys did better than girls in single-shot events, the researchers said, but when put through multiple rematches the boys fumbled, allowing the girls to catch up and often surpass them. … Girls also excel in the classroom. Nationwide, their grade point average in high school math and science is 2.76 out of 4, compared with 2.56 for boys.

And yet, right when he is poised to name the answer to the mystery, it hangs in air to the bafflement of Mr. Derriso — a colleague of Joseph Price, who is getting his doctoral dissertation in psychology: “If boys and girls are equally interested in math and science and feel equally confident about their abilities,” he wondered, “why this humongous difference in intent? I don’t have an answer for that.”

It’s as simple as representation. This is what a visual thinker will tell you — because the answers aren’t in the data. The answers aren’t in the test results. The answers are in the visual narrative our children are super saturated in daily. All it takes is a single YouTube viewing of little girl Riley‘s scathing critique of the hot pink toy aisle to understand that children learn by seeing. If all you show girls is one thing, then it’s not rocket science to wonder why there are no girl scientists when girls are just as good at science as their male counterparts.

To the casual observer who’s in the group visually represented, nothing is amiss. But if you’re not in the group represented and you see no examples of yourself there, the message becomes starkly clear: “you do not belong here” or “this is not for you.”

Intentional or not, obvious or subconscious, without examples of ourselves out in the world to model and to ascribe to “be,” we can easily understand having a population of girls who have the strong abilities and solid confidence about those abilities, yet lack the intent to use those skills to pursue careers in science, technology, engineering, and mathematics.

Case in point, leading toy company Lego only released a female scientist character for the first time on September 1st of this year! This means that for the very first time, girls will be able to play with a popular representation of themselves as a scientist, and perhaps envision themselves being one from a very young age — literally from the time they are playing with blocks.

But that’s where MAKE and the Maker Faire comes in. Everything that has been described up until now is really an institutional read on this issue of women in science — which is to say it’s a read on what’s wrong with “us,” not what’s wrong with “them.”

Karen Corbeill of Sector67 hackerspace and the next generation of young female makers.

If you want to see girls in science making themselves and everyone around them proud, then get thee to a Maker Faire! There are plenty of women in STEM fields there — they just haven’t grown up yet. And with the efforts of the people behind Maker Faire, more and more female makers are joining in to represent. Our job, as I see it, is to facilitate those girls and then get out of their way, because they’re about to change the world.

Reporting back from the World Maker Faire New York this year at the New York Hall of Science, I’m tremendously pleased to say that there were so many little girls and older tween and teen girls representing themselves at the Maker Faire. From the ultra-orthodox little girls of all religions, the fashionistas, and the so-called “tom boys” to the mini-robotics girls and the girls wearing homemade super hero costumes with capes — most of them wearing flashing LED Maker Faire buttons they soldered themselves — I was overjoyed to see girls of all kinds and ages represented and participating in Maker Faire.

The greatest thing about seeing all of these different girls pursuing all of the sciences at Maker Faire was that these girls show up pre-empowered. MAKE has an all-inclusive, “if you’re a maker, you’re in” modus operandi, and let me tell you: the girls are seeing that. This is what attracted me to to everything MAKE — it calls to the essence of the maker regardless of age, race, gender, nationality, religion, or even social group. Even the branding, colors, and graphic design of MAKE is all-inclusive and draws everyone in.

I’m proof positive. As an artist who’s been warmly welcomed into the maker community, I can attest to this very phenomenon. I’ve always touted the use of science and engineering as a means to make my art better. As a result, my project Trailer Park: A Mobile Public Park has won not only art awards, but was also given a whopping six Maker Faire ribbons this year. But I know that in addition to the great honor of being awarded these ribbons, the most important thing is that all the little girls saw that I got them.

It’s the MAKE seal of approval that will really get the gears turning for these girls. Because let’s not forget: I’m just another girl who became obsessed with all things maker, just as young girls are seeing me and thinking how much they would love to bring a project of their own to Maker Faire. That’s why I made sure to say it over and over again to every girl I met. I’d look them right in the eye, point to myself and say, “One girl made Trailer Park. You can make anything you can think of.” And the greatest thing of all was standing in the center of my project, in the center of the Greatest Show and Tell on Earth and knowing they believed me.

18 thoughts on “There’s Something About Women and Science” 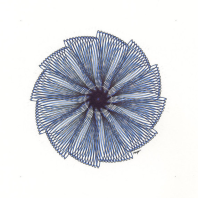 Kim Holleman is a mid-career interdisciplinary artist who attended The Cooper Union for The Advancement of Science and Art in New York and The Rietveld Academie in Amsterdam, Holland. Her award-winning work, Trailer Park: A Mobile Public Park debuted at The Storefront for Art and Architecture in 2006. It has been on display at multiple galleries, events, and conferences in New York. ​ Holleman has developed an interdisciplinary practice that allows her work to relate the concerns of several disciplines. Her work placed in the international ONE Prize architectural competition, and Holleman recently had the honor of presenting her work at theTEDx conference at The Cooper Union. ﻿ Holleman lectures, teaches and arranges workshops on the themes of sustainability and art, nature and the engineered eco-system and contemporary sculpture and model making.

For more information about Kim and her work, please visit KimHolleman.com.