3D Systems, makers of the Cube, a $1,299 hobbyist-level 3D printer, along with considerably more expensive industrial-level 3D printers, has filed what may be the first patent lawsuit in the hobbyist 3D printer market.

3D Systems is claiming that Formlabs, makers of the Form 1 3D printer, is infringing its patent “Simultaneous multiple layer curing in stereolithography.” The Form 1, unlike most RepRap-style DIY 3D printers that use plastic extrusion to build 3D objects, instead uses stereolithography (SL) technology, where lasers are used to solidify UV curable material in layers. SL technology creates 3D prints that are a much higher resolution than can be achieved by plastic extrusion technology, and makes the Form 1 compete in quality with 3D Systems’ higher-end printers that cost many times more than the Form 1.

Neither the Form 1 nor the Cube are open source. However, it’s clear that the results of this lawsuit, and ones like it, will have an impact on the open source 3D printer community.

In a surprising move, 3D Systems is also suing Kickstarter, the crowdfunding site that Formlabs used to pre-sell almost $3 million worth of the Form 1 and related gear. This could potentially be bad for Kickstarter and other crowdfunding sites if they’re held responsible for items that are sold through their site if those products are later revealed to violate patents.

It is unclear if the B9 Creator, another Kickstarter-funded stereolithography printer which uses a DLP projector rather than a laser to cure the resin, will be a future target of 3D Systems.

Patent lawsuits are nothing new to professional 3D printing, which as an industry, has been around since the 1980s. Indeed, much of the reason for the RepRap project and its derivative products proliferating today has to do with patents on Fused Filament Fabrication (FFF) technology expiring. FFF is also known by the terms FDM and Fused Deposition Modeling, which are both trademarked by Stratasys Inc., developer of the technology in the late 1980s.

Patents still constrain the DIY 3D printer market. For example, even though it’s well-known that, when printing with ABS plastic, it’s best to have an enclosed and preferably heated chamber around the print area, Stratasys has an active patent on that, preventing anyone from selling a completely enclosed printer, no matter how obvious it may be.

3D Systems has an entire patent portfolio for DIY 3D printer makers to avoid. Stratasys is also very actively applying for patents that may directly affect the DIY 3D printing market. There are many others with patents, many of which are not obvious to watch out for. Even MakerBot has a patent.

The EFF recently issued a statement about how patents may harm the DIY 3D printing industry, asking for help locating patents that may be detrimental to the industry:

While many core patents restricting 3D printing have expired or will soon expire, there is a risk that “creative” patent drafting will continue to lock up ideas beyond the 20-year terms of those initial patents or that patents will restrict further advances made by the open hardware community.

This is likely to be only the first patent lawsuit that affects the DIY 3D printing industry. 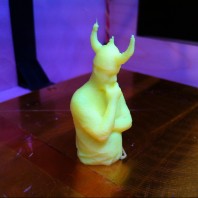