When Making Touches Lives: The Story of the R2-KT Droid

By now you have certainly seen the latest Star Wars movie, Episode VII: The Force Awakens, and met its astromechanical star, BB-8. But did you notice the pink R2 series droid in scenes of the Resistance base? That pink droid is R2-KT and it has a very special story — it’s named for Katie Johnson, daughter of Albin Johnson, a founder of the 501st Legion.

The 501st Legion (aka Vader’s Fist) has thousands of members around the globe who dress as stormtroopers, Darth Vader, and other Dark Side characters from Star Wars. They do appearances for charity and bring smiles to people around the world. Katie Johnson, like her father, was a huge Star Wars fan. (Who wouldn’t be, with a dad who basically created the real-world version of the Empire?) Unfortunately in 2004 at the age of 7, Katie was diagnosed with terminal brain cancer. With the support of thousands of their 501st friends, the family tackled the real-life dark side battle of cancer in their little girl.

One day at church Katie’s older sister, Allie, noticed that the church window looked like R2-D2. Allie suggested that perhaps they should build Katie an R2-D2 to watch over her while she underwent her treatments, the way R2 watched over Padme in Episode II: Attack of the Clones. With no time to spare, Albin contacted the R2 Builders Club for help in building such a droid. Builders responded and began helping and donating parts to build Katie’s guardian. Somewhere in the process Allie suggested that perhaps the droid should be named R2-KT in honor of her sister.

With time short and Katie’s condition worsening, Jerrie Green, an R2 Builder, painted his droid pink and shipped it to the Johnsons. R2-KT was born and for a short time was the guardian of a little girl who loved life as much as she loved Star Wars. A month later on August 9th, 2005, Katie Johnson passed away.

After Katie’s passing the Johnsons carry on her legacy with R2-KT. They’ve taken R2-KT around the world to visit sick and terminally ill children and bring them some joy when they need it most. R2-KT has also raised hundreds of thousand of dollars for charities, such as the Make-A-Wish Foundation. R2-KT’s mission is never-ending and has touched many lives.

In 2007, R2-KT went from being a fan-built creation to a canon member of the Star Wars Universe. Dave Filoni, director of the Clone Wars animated TV series, gave R2-KT a cameo in Season 5, Episode 10. When filming began on The Force Awakens, director J.J. Abrams understood the emotional bond fans have with the Star Wars universe, and in a show of support for R2-KT’s legacy and mission, Abrams had the droid shipped on set and included as a part of the Resistance force. Katie Johnson may have only lived a short life, but her legacy has now crossed galaxies far, far, away and will be known long into the future. You can keep up with R2-KT’s adventures on their website. 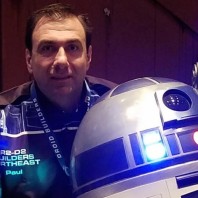 By Paul Gentile (The Hobby Guy)