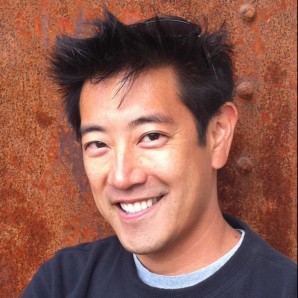 As a co-host of Discovery Channel’s MythBusters, Grant has swum with sharks, spun a merry-go-round with a shot from a sniper rifle, hung beneath an airborne helicopter, fired cheese from a cannon into the San Francisco Bay, let two dozen tarantulas tap-dance on his head, dropped a BMW from a Sikorsky, cut a car in half with a rocket sled, and built many awesome robots. All in the name of science. Before MythBusters, Grant lit the lights in R2-D2’s dome and gave the Energizer Bunny his beat as an animatronics engineer and model maker for Industrial Light & Magic. His work appears in several blockbusters including The Matrix sequels, Galaxy Quest, Terminator 3, and Star Wars: Episodes I-III (though he is in no way responsible for Jar Jar).

Grant Imahara’s Hollywood Dream Machines, and the Spider Robot that Almost Killed Him

As a MythBuster, model maker, and combat roboticist, I've hacked everything from R2-D2 to the Energizer Bunny.

When I think about all my builds over the years, I find there are a few components I use over and...