The Forge began in a coffee shop in 2013. A small group of tinkerers, inspired by visits to Maker Faires and makerspaces, wanted to leave their garages, basements, and makeshift workshops to make together. So, they started talking about it with, well, everyone. Everyone included a new developer in downtown Greensboro. He just so happened to be looking for a tenants to occupy a building he had just purchased on West Lewis Street.

Real estate on W. Lewis, at the time, was risky business. Few wandered past the railroad tracks to explore the south end of downtown. For years, few businesses thrived in this area of downtown that was known as the “other side of the tracks.” However, this wasn’t always the case. The neighborhood was once the center attraction. Blue Bell Denim, known for their Wrangler brand, had its headquarters there. W. Lewis itself was once a main drag. There was a grocery store, a blacksmith, and livery stables, among other businesses that made up a complementary community. But the economy changed, and with it the landscape. Blue Bell was purchased by VF Corp., and they headquartered on the north end of downtown Greensboro. Businesses moved away from the “other side of the tracks.”

The Forge’s first grand opening was in 2014. Named in honor of the original tenant, a blacksmith, The Forge quickly grew. Artists, artisans, inventors, entrepreneurs, students, and tinkerers inspired donations of equipment and tools from local businesses and industry. A brewery moved in on one side, and a coworking space on the other. Forge members started businesses, filed for patents, found jobs, learned skills, and made new friends.

W. Lewis cycles back into a community, and more businesses open on the other side of the tracks. Eventually, the Forge outgrows the 3,400 square foot blacksmith shop. The makerspace reopens in April 2016 next to a university gallery in a building that used to be livery stables.

On W. Lewis in 2016, a machinist teaches an engineering student how to use a metal lathe on one condition. The student uses a 3D printer to do a favor for the CEO of a beard and mustache novelty product company. And of course, the CEO has a mustache. Using a Fusion 3D printer, the student prints trophies for a Beard and Mustache competition to take place at the brewery. The student designed and developed the 3D model for the trophy with ease from his experience using the 3D printer to develop security focused cell phone accessories. A part of his project requires some machined parts. As he waits for the trophies to finish, he learns how to use the metal lathe from the mustachioed machinist.

First as a member, and now as the Executive Director of The Forge, I have tried to define makerspaces. Simply put, they are places where people and ideas come together with tools. 3D Printing, lasers, welding, textiles, machining, woodworking, soldering, programming, you name it, and someone has done it at The Forge. But more than that, The Forge, like other makerspaces, are the expressions of a community and a dynamic force fueled by the creative collisions of people, their ideas, and ultimately their stories. I am fortunate to be in a position that allows me to hear their inspiring stories. The Forge has made a positive impact on Greensboro’s downtown, and will continue to do so as the stories of its members develop. 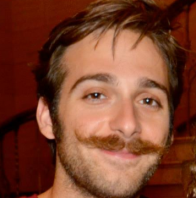 Joe is the Executive Director and a member of The Forge. When not dealing with the business of a nonprofit, he likes to get lost in one of the departments at The Forge making, well, anything.