ETM: Exploration Through Motion is a kinetic Da Vincian machine that illustrates the painting “Grand Canyon of the Colorado River” by Thomas Moran. The project was the final for all Design 1 students at Philadelphia University located in East Falls PA. My team consisted of myself and two classmates Charles Barilo and Peter Holderith. Each of us had a unique set of skills to bring to the table. As freshman we are just at the beginning of our studies, but each of us had a different background. This allowed us to develop a project with so many complex parts, and still meet the deadline.

From the launch of the brief each team had one month to travel to the Philadelphia Art Museum and pick a different painting to turn into the device. Upon selection we sat down and came up with various idea of how to interpret the painting. After a class pin up critique we settled on an idea and further developed it.

Much work started from sketches and research of the canyon itself. We analyzed topographical maps and tried to find a section that told a story. We enjoyed the wide bend of the canyon and decided that this would be the section we would focus on.

Development moved to the computer (more specifically Adobe Illustrator) where we digitized the map. At the same time we were developing the internal mechanisms that would drive the machine. We had to consider our materials, due to the fact that they had to fall inline to what was around in the Da Vincian era. So while we could have gears, we were limited to the type of gears (paddle or peg) and the material that constructed them (no metal). Various models and prototypes were created before the deadline.

In the end a some 200 hours combined were spent on research, design, development and construction. Of those 200 hours, 11 hours were laser cutting, 24 was digital design of the map alone. 102 feet of dowel was used to create the lift of the map.

To see more pictures and read about the construction, check out this gallery. 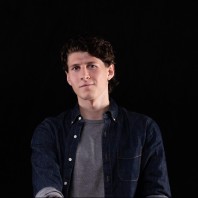 Zachary Samalonis is a student at Philadelphia University located in East Falls, PA. He is studying Industrial Design and wants to use design to create memorable experiences for people. You can follow his work on Behance