Editor’s Note: Fort Worth, Texas-based MAKE reader Wayne Arendsee wrote in to tell us about the fun he and his son Tucker had building MAKE’s Homemade Sugar Rocket project together. We invited him to share his tips and tricks with you. The weekend is here — time to shoot rockets!

Earlier this month we followed William Gurstelle’s instructions to build the Homemade Sugar Rockets featured in MAKE Volume 35 (The Danger Issue). We failed, learned, failed some more, learned some more, and through persistence had great success and improved the recipe to our liking, and hopefully to yours, too. I hope the following notes on the process will help you with this fast, easy, and super-fun project.

• A surplus of paper grocery bags gave us all the casing material we could want. When cutting these into strips for rolling into casings, be sure not to include the overlapping seam of the bag — it makes for a lumpy roll and is harder to work with.

• We started with 3/8″ dowels (per plans) to form our casings, but realized later that a larger dowel — 5/8″ diameter — made a casing that was a lot easier to work with, especially when loading fuel.

• Titebond Moulding & Trim Glue was on hand, and worked outstandingly for the casings. I’m sure any white glue or other aliphatic resin (Titebond or similar) will work fine, but this stuff was really tacky and dried fast. I have yet to see it on the shelves at the big box stores, but it should be readily available at specialty woodworking retailers like Woodcraft Supply.

• All of our rockets used water putty for the nozzles, which is easy to sand and drill, but the putty requires a lot of time to fully cure (overnight is best).

• There was a discrepancy in the plans regarding the drill size required for the nozzles, so we found one the same size as our core nail and used that.

• A little web searching revealed that Spectracide brand stump remover is, for all practical purposes, pure potassium nitrate. Not so with other brands, so use Spectracide unless you know of another brand that is also pure. (Spectracide is about $7 for a bottle at Lowe’s; Home Depot carries a different brand, which is not potassium nitrate). One bottle of stump remover will provide enough fuel for dozens of rockets.

• I purchased an electric hot plate at Wal-Mart for $20, and a small pan at a garage sale for $2. These worked great for cooking fuel. Sugar and potassium nitrate will melt into a thick plastic when heated, so I’m not sure how much the ball-milling process actually affects the fuel’s performance. Some batches we mixed using Gurstelle’s ball-milling method, while in others we just thoroughly mixed while melting. Sometimes we used granulated sugar, other times we used powdered sugar. Didn’t notice much of a difference, but to find out for sure, suggest it as your kid’s next science fair project — and share. If you do elect to ball-mill your fuel, be sure to use a metal paint can. I tossed the fuel ingredients and some fishing weights into a plastic container as Gurstelle suggested, shook it once, and the bottom broke, spilling the mix everywhere.

IMPORTANT: When melting your fuel, do not heat it beyond the “peanut butter” stage. If you overcook it, the mixture will become dark brown and will not work. Once you get to peanut butter, remove the pan from the heat, pour the fuel into as many casings as you can (larger diameter casings make this much easier), pack the casings, put the pan back on the heat to get it back to a pourable state, and repeat as you are able with the rest of the fuel. Form any leftover fuel into a ball with a fuse embedded, and when it’s cooled, it makes an excellent smoke bomb.

• Packing the fuel proved to be the trickiest part of the process, especially with the smaller (3/8″) casings. We had varying success with: a) spooning the fuel in with popsicle sticks, b) rolling the thick mixture between our palms into thin “worms,” and c) pouring directly into the casings from the pan. The third method worked well, but you do have to use larger casings (5/8″) for best results. With the core nail in place through the nozzle, stuff enough fuel in so that it is slightly higher than the end of the nail. Use a hammer or mallet to lightly tamp the fuel into the casing. As the fuel cools, remove the nail.

NOTE: We did try packing fuel without the core nail in place, intending to drill the core afterward. Not much success here. During drilling, the flutes of the drill quickly loaded up with the fuel and were very difficult to clean between cycles (generally it took two cycles to complete the core hole). In addition, though we were using a drill press, it was difficult to hold the motors vertically for drilling. The drill bit “walked” through the side of one motor, which produced some rather interesting flight characteristics. For fun we patched the hole with a few wraps of masking tape and lit the rocket. At about 3 feet out of the launch tube, the fuel burned through the tape and essentially the rocket hovered (equal thrust from both ends) while spinning crazily. Quite a show!

Fly, Learn, and Fly Some More

Our first two rockets (made per plans) never left the pad. Rocket #1 turned into a smoke bomb when the nose cap blew off. Apparently we did not allow the water putty to cure long enough. We wanted to fly right away, so we launched when the putty was dry, rather than fully cured. Rocket #2 didn’t fly because the fuse was not inserted far enough to get ignition due to core-forming problems. Rockets #3 and #4 had slightly more success and actually left the launch tube. However, both flights were cut very short (about 20′) due to the uncured water putty in the nose caps. Fuel burned through the interface of the cap and casing on #3, and the cap blew off completely mid-flight on #4. Rockets #5 through #8 never left the pad due to overcooked fuel.

Back to the Drawing Board

Next, the casings were formed with a 5/8″ dowel, and to compensate for the larger diameter, we made our strips of paper bags longer: 4″x12″. This worked fine. We also didn’t bother cutting the casings in half, going instead with the motto, “bigger must be better.” On this batch, we learned you can pack the nozzle ends with putty, and stand them on the putty end (on waxed paper) to cure, which leaves a nice flat surface for drilling later.

The larger diameter dowel also made the fuel packing easier. At this point we decided to use a larger, 8d nail to form the core. And again water putty was used for the nose caps; this time curing completely overnight. Because the motors were larger, we had to use a 1/4″ dowel for the stabilizer stick to get close to a proper balance, rather than thin bamboo skewers that we used with the small rockets. We attached the dowels with a few wraps of masking tape.

The first few flights produced some impressive results, with the rockets flying high — until the motor pressures blew the nose caps off. Our weekend was drawing to a close and we still had casings to fuel and launch. To solve the nose cap problem we used 5-minute epoxy mixed with sawdust to form the cap rather than water putty — a fabulous improvement!

Now we had much better flights, but the more powerful motors were producing enough thrust to separate the stabilizer sticks from the motors mid-flight. One more trip back to the workshop and we used 5-minute epoxy to attach the stabilizers to the motors. This did the trick. Our final two flights were long and high: 500′ and 600’+. Well worth the time, effort, and learning experience.
In the coming weeks I’ll be tweaking the design some more, just because they’re so much fun to build and fly. I can’t wait to dig into Dan Pollino’s book and really up my game!

Have fun. Be safe. Go big or go home! 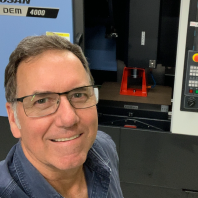