Imagine a child’s first white Christmas: the excitement of snow, the mystique of Santa, and the oh-so-important presents. Now multiply that feeling threefold, and add in some fire, a few hundred robots, and enough paper rockets to make NASA nervous. Overwhelmed? So was I!

Because I work at MAKE, I know this may come as a surprise, but this was my first (gasp!) Maker Faire! On the drive to San Mateo, I didn’t know what to expect. What would the crowd be like? Would I get any free time to check out the booths? Did the compressed air rocket booth have a maximum age? One of these questions loomed above all; I’ll leave you to figure it out!

The answer to each question surprised me. First, I thought that a large crowd, in a hot, enclosed area, would be an irritable bunch to deal with. I was completely wrong! During my shifts at our MAKE Booth in the Expo Hall, I held interesting conversations with new readers and veteran makers alike, on topics ranging from featured projects to favorite booths at the fair. I chatted with many visitors about their maker beliefs, and we swapped stories of projects gone horribly wrong-all in good humor! I did not encounter a single person who was irritated, difficult, or rude; everyone respected the mutual interests of those around them. When a man called the cellphone he had lost at our booth from another phone, he and I chatted about the newest Arduino before confirming a rendezvous point!

I was cleverly given split shifts at the booth, so that I could wander and explore in the middle of the day before returning for the breakdown. I quickly learned that one does not simply “wander” through Maker Faire; I’m pretty sure I was the only person over the age of 10 who did every booth’s activity as I passed it! The amazing variety of subjects that all fall under the umbrella of “DIY tech” never ceases to amaze me. I learned to make fire with a bow-drill, then hustled over for a turn in a motorized cupcake!

Maker Faire exceeded my expectations in every way. The entire MAKE Crew, along with the fantastic volunteer Maker Corps, gave me the quintessential First Maker Faire: a smooth setup, a wonderful event experience, and an easy breakdown. Because I was staff, I didn’t have the time to get to all of the booths. Next year! I immensely enjoyed chatting with everyone, and because of their sociability, I’ll end with this: if you ever want to make a couple thousand friends in one afternoon, head to your nearest Maker Faire! 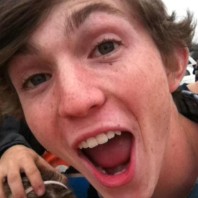