What I Learned Building a Mechanized Spinning Musical Instrument

The Hexachord is a three-foot-tall, six-chambered, motorized musical instrument. It’s an ensemble, machine, and interactive performer all in one. It’s a complex gadget that makes minimalist music.

You probably haven’t heard of this instrument before, as it’s my own design. It took quite a lot of work to create: several months went into research and planning, and a month into the actual tinkering and building process.

This contraption came out of one of the most unique jobs I’ve ever had: working as a “Tech Disruptor” for the Intel Experience Store. I was essentially a Maker-in-Residence, tearing apart and recreating with e-waste. As a person with a music in her blood, I quickly began assembling a motorized noisemaker using the motor from a videocassette rewinder. It acquired percussive elements, and guests to the store were eager to interact with it; one child gave it an alternate life as a catapult, coworkers danced to its rhythms, and one guest rapped along with it for a solid ten minutes.

Eventually, I tried to add strings, which introduced a few complications. String instruments usually have a resonating chamber or electronics to amplify the sound, and my PVC pipe frame wasn’t particularly resonant. Also string instruments are generally played completely by the user, but my instrument had the pick mounted to the spinning DC motor; it would play the same patterns with each revolution. A variable AC/DC adapter let me alter the tempo, but that was the only variation, and I wanted interactivity.

Of course, I could have gone back to the traditional method where the human does all of the plucking, but what’s the fun in doing what has already been done so many times before? To make a new design, I had to look at the problem differently.

The Hexachord came out of this design challenge. I liked the idea of a semi-autonomous string instrument. At the beginning, I had a few potential solutions to choose from. Manipulate the plucking arm to skip certain strings? This would incorporate the smallest number of moving parts, but it would require some serious precision to control which strings it hit. Move only the strings in and out of the way of the pick? The motion required for this would be pretty simple, but maintaining pitch and transmitting the vibrations to the sound chamber would be tough. I made diagrams and pondered all possibilities. Finally I landed on the idea of individual stringed sound chambers that moved independently, essentially an ensemble of complete instruments surrounding the plucking arm. Making it a six-chambered instrument mirrored the number of strings on guitars, and gave me the option to split the loop into a double or triple time signature.

I’d done relatively little fine woodworking before this project, and I found that learning as I went helped dramatically with the design process. For sound chamber creation, starting with cheap plywood on the first version let me make inexpensive mistakes and discover what wouldn’t work. Each new version brought refinement of both the wood quality and the design. By the time I got to the nice wood, I had enough experience that I wouldn’t make a mess of it.

I used my favorite prototyping materials — skewers, cardboard, and hot glue — to try out different mechanisms that could move the sound chambers, as well as a small model of a frame to hold all of the elements. These test mechanisms didn’t move all that efficiently, but they worked well enough to determine that a scotch yoke mechanism would be my best bet.

Approaching something like this without much experience under my belt was a little daunting, to say the least. Fortunately, I work in youth Maker education, which involves convincing kids that they can, in fact, build things, regardless of their current skills. This helped with the decision to start making my instrument before I was experienced at this medium.

Lack of experience is no reason to put off beginning a project. If you aren’t interested in tutorials with predetermined projects, you can still apply the lessons to your own creations. This is one of the core tenets of maker education: passion for the project is a strong motivator to learn. Nothing is merely theoretical and it makes the learning personally rewarding.

Fortunately, I have enough experience to make me an expert at tinkering; I’m good at identifying what I need to learn, and I can fail efficiently.

Failure is very underrated. I try to impress on my students that failing to achieve what you shoot for is not the end of the world; it is a gift. When we fail, we learn to troubleshoot, we learn to deal with frustration, and we get to turn things upside down and analyze. We gain an understanding that cannot be found by doing what we’re told to do and getting the expected result. We learn why, and we’re empowered by finding the answer ourselves. Failure is so important for learning.

That said, I learned a lot making my Hexachord.

I learned that your math has to be accurate and your measurements precise to succeed in making even a simple hexagon.

I learned that losing a week’s worth of materials and progress on a “simple” hexagon is disheartening, and it’s okay to let yourself wallow a bit before picking yourself up and trying something else.

I learned that cutting corners for early versions is better than getting mired in the details and never getting it done.

I learned that everyone has an opinion, and even suggestions you don’t wind up following are worth consideration, if only to solidify your current plans.

I learned that, rather than being a hindrance, limitations on time with certain tools makes you a better organizer.

I learned that downstairs neighbors can be very patient with the noise from power tools when you keep them in the loop.

I learned that being passionate about something makes losing sleep over it totally worth it.

I learned that sharing details is better than hoarding them.

And I learned that I didn’t learn nearly everything, but all those lessons and failures make me a better educator, more efficient Maker, and a fuller person. 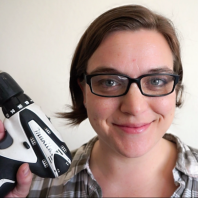 Barb is a maker, maker educator, and Lead Tinkering Instructor at the reDiscover Center in LA. She makes weekly high-speed project videos on her YouTube channel, Barb Makes Things. On any given day, she may be doing woodworking, 3d modeling and printing, electronics, Arduino, wearables, and papercraft.