Editor’s note: While we were preparing this article, Jane interviewed herself just for fun and we liked it, so here it is.

This week she finished the final elements (in the actinide aka actinoid series) and began stitching the complete work together for framing.

I timed myself: It takes 5 minutes for one row in a square, so in theory that is 2 hours per element square, working flat out. And there are 120 squares! What will you do with the project? Display it at craft fairs or art galleries. Plus I will take it with me in my STEM ambassador role promoting science in U.K. schools (stem.org.uk).

How to Macramé the Periodic Table

Follow the pixel pattern on its side, knotting right to left for 30 rows in white. You’ll make two knots to create each pixel (below). You can download the other patterns here.

When black appears on the pixel pattern, knot the black thread left to right around the white thread so a black pixel will appear (below).

The black thread didn’t photograph well, so let’s take a better look at the two types of knots. In the photos below, the working thread (white) is knotting right to left; do it twice.

Next, the structural thread (pink) is knotting left to right to cover the main color; do it twice.

Finishing off a pink pixel, you see a single pink dot amongst the white (below).

To get started with macramé, check out our Macrame 101 tutorial. 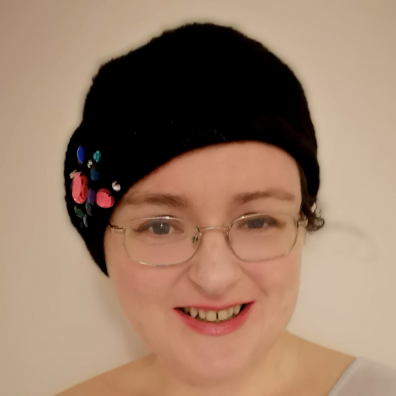