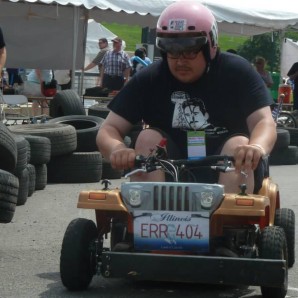 is a graphic designer for Make: Magazine. His life is defined by three B's: Bikes, Burgers, Battlestar Galactica. Tiny electric car enthusiast and founder of the Power Racing Series. (www.powerracingseries.org)

Also helped start a hackerspace that one time and tricked himself into thinking he didn't write this in the third person.

When you've imagined the apocalypse for so long, what do you imagine afterwards?

Jen is a polymath with skills in all manner of engineering and artistic techniques and is a key member of...

When she's not refereeing roller derby or caring for her pet pigs, Blue Martin can be found whizzing around a...

Regretfully, Your Hoverbike Has No Place in Her Majesty’s Secret Service

See attached: a letter regarding your application to Her Majesty's secret service for the position of "Lead Inventor"

The dunk tank bellowed with flame and pushed and howled at another throw as the occupant flirted with immolation.

Over the Top: A Brief History of 21st Century BattleMechs

When historians of the future look back on the history of giant mechanized robot warriors, they'll say it all started...

What Do Jurrassic Park, Twisted Metal, and Waffles Have in Common? Power Wheels Racing

Coming to the 10th Annual Bay Area Maker Faire is the 7th season of Power Wheels racing. The Power Racing Series is a...

Has it been a busy week for you? Need a bit of relaxation with a maker twist? Instead of firing...

There is a rather large gender gap in the makerspace community; one that has mirrored the well-documented gaps in various STEM...